This is a special kind of music video: a blockbuster title sequence song, made famous by the James Bond movies, though you see them with other big-budget monsters.

Except this one was created by college student Kurt Rauffer, who should immediately pack a suitcase, get on a metal tube filled with explosives and fly to Hollywood, where they’ll give him stacks of green paper to work this magic for IRON MAN 4: ROBERT DOWNEY, JR. CHEWS ALL THE SCENERY.

The music is a piece Radiohead recorded for a Bond movie (but wasn’t used), so yeah, it’s perfect.

More perfect: the tone and graphics are spot-on. Couldn’t improve upon this if we tried.

Well played, Kurt the Rauffer, if that’s your real name. Give is moar moar MOAR. 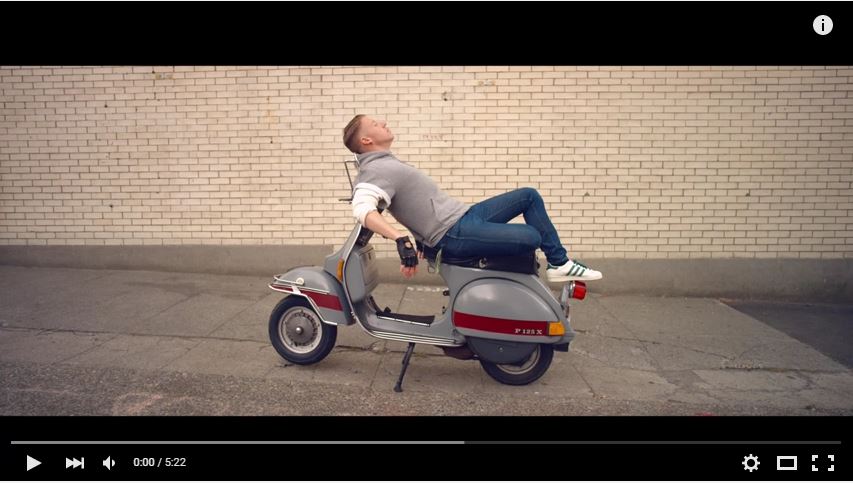 Why do music videos still exist now that MTV is dead?

The old answer, back in the day, was a simple formula:

(a) Band makes a music video

(c) Everybody profits, with MTV getting bazillions in TV ads for broadcasting free content while the band sells bazillions of obscure artifacts that archeologists call “tapes” and “CD’s.”

Today is different. High school and college students today don’t buy tapes or CD’s, though for some reason they do spend real dollars on an even more obsolete technology involving massive vinyl platters created by musicians who retired long before they were born.

Today, the reasons for music videos are subtle and mysterious, given that MTV—after a corporate retreat that must have involved industrial amounts of alcohol, peyote and stupidity—stopped running free music videos 24/7 and decided to give the world Snooki, the Situation and Real Teen Moms or whatever.

Why make music videos? Here are the secret reasons no one will tell you, because I’m making them up right now:

1) Name ID is everything

Say you’re a rock band, and just starting out, as in “we just got our first gig!” means playing at your cousin’s wedding in exchange for two cases of Alaskan Amber.

To become famous, nationally, you could spend $10,000 a month on a top rock publicist and run a national ad campaign about your latest album and concert tour. Except you don’t have $5 million to even attempt such a thing. If the drummer sells his VW van, you might have $565, which could hire you a college PR student who’d write three press releases and make you a Twitter account.

Videos on YouTube, though, can give you a global audience—if you’re willing to do anything to get publicity.

Quality doesn’t always matter with music videos. Shoot the thing in grainy black-and-white, or out of focus, and people will think your brand is gritty and authentic instead of slick and corporate.

For any sort of band or singer looking to break in, name ID is the whole shooting match, and music videos are perhaps the easiest way to get your face and songs out there.

Standing out, as an underdog, means taking gigantic risks on a tiny budget.

Nobody did this better than Ylvis with WHAT DOES THE FOX SAY?

2) To get their film groove on

Filming an artistic music video, a mini-film, lets them live that fantasy.

If you’re a 30 Seconds to Mars fanatic, putting the song on your iTunes playlist is one thing. A new music video from Jared Leto, though, is an event. He’s an amazing actual Hollywood actor, so it’s not a shock his videos are amazing.

THE KILL is a great example of music video as short film.

NOVEMBER RAIN is another classic, running more than 9 minutes without boring the audience one bit.

Honorable mention, because they get the whole KILL BILL vibe perfect: Iggy in BLACK WIDOW and every single video Macklemore has done or ever will do.

3) To achieve perfection and therefore immortality

In the studio, you can re-record tracks and mix a song for weeks until it’s perfect.

On a concert stage, visual elements let you put on a real show, though you have to pick between the stale, cold and impersonal perfection of lip syncing or the energy of imperfect live singing while you try to dance and not flub the high notes.

Music videos give you the best of both worlds: perfect sound plus perfect visuals.

UPTOWN FUNK nails this. Amazing sound and a nice variety of visuals. It’s a show.

4) To send a message

Typically, rock stars trying to do message-y videos come on too strong, and it feels like a lecture.

They’re at their best when they don’t try to be politicians—when you can tell this is something they wrote and care about, not lyrics from a paid songwriter matched with beats from a producer.

NOT READY TO MAKE NICE by the Dixie Chicks is my favorite protest / message video.

How does a band make money by putting music videos online for free?

Because nobody really sells albums and songs in 2015, not when your average 7-year-old has the tech skills to go online and download songs for free.

Even the biggest stars make most of their money from selling concert tickets and merchandise. Sure, some make royalties whenever Spotify and Pandora plays their stuff, or cash in for millions by selling tunes for tv ads by Toyota selling Tundras.

Concerts, though, are today’s cash cow.

Katy Perry nails this, giving people a taste of what her concerts would be like in every video: costume changes, dancing sharks, fireworks and Katy Perry flying around the stadium.

GANGNAM STYLE by Psy stands out as one of the best music videos every for getting people to become interested in seeing him live. You see this and think yeah, that guy will put on a show. I’d pay money to see him live.

U2 did this in epic style with WHERE THE STREETS HAVE NO NAME, as the band shot their music video on a rooftop in downtown LA while the cops tried to shut it down in real life. You get a gritty feel for what they’d be like, up close. I’ve seen U2 in concert and that feeling is real.

Kristin Chenoweth likes to do something few performers dare: grab somebody random from the audience and perform a duet.

This can be funny, or so bad it’s good, like karaoke writ large with a big pop star and an audience of 20,000 instead of 14 guys at the Elks Lodge.

In this case, Chenoweth got a shock when Sarah Horn answered the call to “who knows the words to For Good from Glinda?”

Music videos are common, and have been done so many time, it’s hard to do anything truly different or interesting.

The Beastie Boys played cheesy cops with giant mustaches in SABOTAGE, which is classic. But 99 percent of other music videos are rock stars preening, divas dancing, boy bands prancing or soulful singers looking all pouty and depressed with their guitar.

CLARITY by Zedd has guts and ambition. They shot footage other than the lead singer wailing and the guitarist thrashing. The film looks interesting, like it could be part of a movie — I wanted to see more of what they did out in the desert and the streets.

No matter what you think of Sting — and you should think VERY WELL of him — he’s never boring.

This video is part travelogue, part concert-montage. And it has yet to bore me.

Oh, this is brilliant. The classic ’90s song by Vanilla Ice, as sung by clips from various movies.

For fans of this song, I took the original and put it under the lyrical microscope, line by line:
ICE, ICE BABY as interpreted by the Red Pen of Doom

Jessie the Ware is British and therefore can make things like “That’s all kinds of rubbish” sound incredibly smart and cultured. I believe, deep in my soul, that everyone should be required to pick between a British or Irish accent.

Either way, her songs and videos are interesting. Jessie never takes the safe way out. She’s not afraid to try something new with every video. For that, I salute you, Jessie the Ware. .

So this Jessie Ware, if you haven’t heard of her, is talented and different and old school mates with some singer named Adele and some other singer named Florence, as in Florence and the Machine.

Many, many rock and pop stars tend to make videos that all look the same, and I mean that both ways: every video they make looks like (a) every other video they’ve ever made and (b) every other video made by similar artists. This has been true since Hair Bands put on their first pair of spandex pants in 1982 and will be true forever.

So I’ve found this genius band from the big honking nation known as Canada — which has provinces where you could fit Texas and Alaska inside and still have room for most European counties — and while WOTE is getting radio airplay know for Red Hands, they’ve done a zillion covers. Here’s the thing: those covers are often better than the originals.

Related: RED HANDS by Walk Off the Earth is music video goodness

Here’s one member of WOTE doing Bruno Mars, all by his lonesome. And he’s just messing around with a loop machine in his guest bedroom or whatever. Brilliant.

The original by Bruno the Mars:

Reformed journalist. Scribbler of speeches and whatnot. Wrote a thriller that won some award (PNWA 2013). Represented by Jill Marr of the Sandra Dijkstra Literary Agency.

This is one of the first music videos to feature some sort of story.

You know, a plot instead of (a) the lead singer emoting into the microphone while (b) the rest of the band pretends to play their instruments for the 45th time until (c) the director finally calls it good.

Because this is a piece of epic music history, 12 years from now, somebody will write their doctoral thesis on it. If you are that person, please research whether the female lead’s hairdo was an accidental homage to Princess Diana or totally on purpose. Kthxbai.