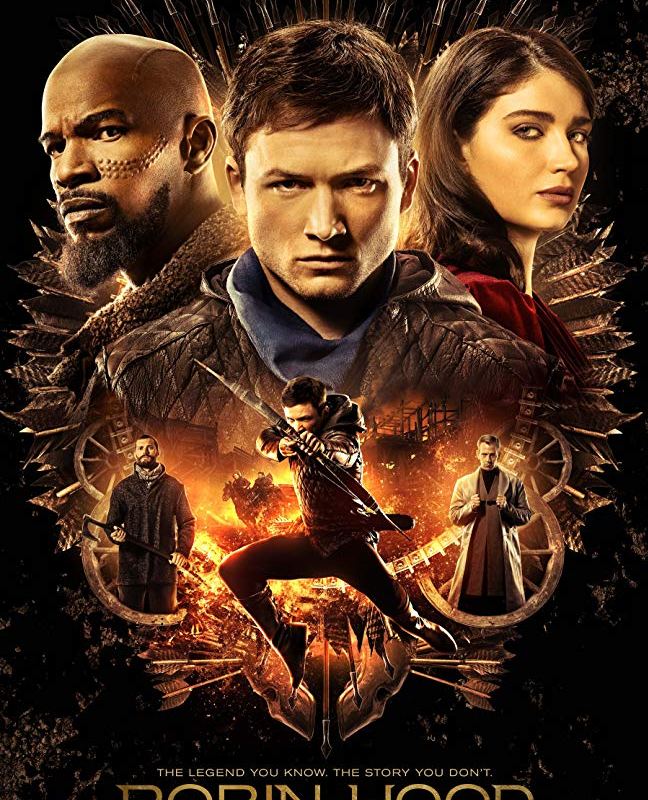 Listen: I love cheesy action films and B movies of all types, as long as they don’t take themselves too seriously. Feed me summer popcorn flicks, meant to entertain, instead of pretentious nonsense.

ROBIN HOOD is meant to entertain.

It’s got a good lead actor (Taron Egerton, famous for THE KINGSMEN films), a solid sidekick (Jamie Foxx) and a great villain (Ben Mendelsohn from THE DARK KNIGHT RISES and ROGUE ONE)–plus a big budget ($100 million).

Add to that a built-in audience who loves the story and character of Robin Hood.

Except this movie bombed at the box office. A dumpster fire.

Why did this film go so wrong, so fast?

Act 1 is a good start

There’s a lot to like in the first act. see Robin’s ordinary life and get a good introduction to Marian when she tries to steal Robin’s horse…and he lets her.

His life gets upended when he goes to war during the Crusades and comes back to find his estate confiscated by the Sheriff of Nottingham, who’s taxing everybody to death.

It’s an effective start, and the training sequences with John and Robin are great.

So how does the movie go sideways? I mean, this film makes Kevin Costner’s terrible British accent look like a minor problem in an epic masterpiece.

Why the middle turns meh

Act 2 gets confused. The scenes with the Sheriff of Nottingham are decent, letting him chew up some scenery.

Yet the middle gives us a Robin Hood movie that seems to switch time periods, as if the director wants to mash up medieval Crusades action with huddled masses working in Victorian  factories and mines along with 21st century antifa protests.

There’s a big dinner where all the wealthy people show up, with women dressed in furs and high heels (I kid you not), and a giant CGI action sequence set up with horses and carriages that feels more Ben Hur than Robin Hood.

You CAN mix things up like this–A KNIGHT’S TALE with Heath Ledger threw in modern rock songs and other craziness, and it worked. The degree of difficulty is simply really, really high.

Basically, Act 2 is a hot mess.

How the climax isn’t climactic

And then we get to Act 3, where things truly go south.

The first rule of storytelling: save your best scenes for last.

There were great scenes in Act 1–the battles from the Crusades, the training montages with John–that simply eclipse anything offered in Act 3.

The Sheriff of Nottingham meets his end, and not at the hands of Robin, but John.

Taking his place as Sheriff is the romantic rival, the lover Marian took while Robin was believed to be dead. And hovering over everything as the Biggest Bad Guy of Them All is the cardinal, or the pope–I forget. Plus there’s a bad guy soldier, the same man who clashed with Robin during the Crusades, brought in as a mercenary to catch the Hood.

Hey, you don’t need Michael Bay explosions to have a tense, exciting movie. The ending of Michael Clayton is one of the best Act 3 climaxes in history, and there isn’t a gun, knife or explosion in sight. Just two people talking. No amount of CGI could improve this scene.

HOWEVER: If you’re making an action movie, you need action in the climax, and what we get in Act 3 is a let-down from what showed up on the screen in Act 1.

A bow and arrow is a great tool for Robin Hood, and fun when he uses it for heists and hijinks. Yet it’s a terrible weapon, as a storytelling device, for confronting the villain. Which should be singular. Give us one main villain.

There’s a reason why the best movie fights tend to be bare-handed brawls or swordfights.

Swordfights are just great cinema, and that’s what I expected for the climax of ROBIN HOOD.

Think about THE PRINCESS BRIDE and every STAR WARS movie ever made: the duels with swords or lightsabers are beautiful and essential to the stories. Edit those out and they’d really hurt.

So I’ll leave you with the kind of thing ROBIN HOOD should have put into Act 3: a long, evenly matched duel.